Our team wishes you all Merry Christmas and very Happy New Year!

This year we managed to contribute a little bit of fun and make people smile. In return you made us extremely happy by writing your thanks and appreciations in emails and comments on AppStore and Android Market. Especially in Russian AppStore – огромное спасибо!

To celebrate the holidays, we developed a new seasonal character in the Yumm game – Santa Yumm. Don't forget to make your wish when he launches the rocket and may it come true in the New Year! 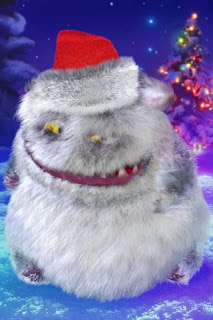 For Android users, Santa Yumm is a separate free app in Android Market which can be downloaded here.

Have fun and have fantastic holiday break!
2 comments:

After releasing the first version of Yumm, it has had over one million downloads with people leaving many positive comments. This kept us working on the next version and today it is finally released to AppStore.

All people who downloaded the game just loved Yumm and he is always perceived as a real tiny creature living in a phone. We thought that it is time to introduce other members of Yumm's family. In the new version you can find two new characters - Halloween and Yummi. 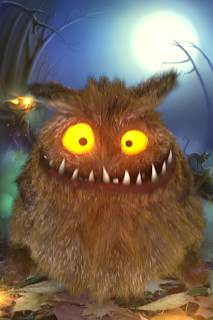 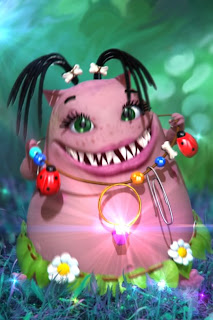 Halloween is Yumm's scary brother. They don't usually hang around together, but if you play multiplayer mode, they would love to bite off your and your friend's fingers.

Yummi is Yumm's lovely girlfriend. Despite her charm she also armed with sharp teeth. If you like Yumm, you got to play with her too. You can be sure that she will make you laugh.

With new multiplayer mode you can compete with your friends and see who has got better reflexes, which is one of the features that has been asked for by players. Here two different creatures can be sited on both sides of the screen. The players should place fingers in their characters' mouths and play as usual. However, the main challenge is to not be scared by the opponent's creature, as they will shut their mouths at different time.

Let us know what you think about the new version, Yummi and Halloween character.

You can also download our Press Release and Press Kit.
2 comments: Since Yumm has appeared for iPhone it became real hit in several countries and it has been #1 Top Free game in Russia for 9 days.

Reading comments on iTunes is really amusing and makes us happy for all who have downloaded. However, we have read that a few people actually got scared of Yumm that they even dropped their phone, hopefully, nothing was broken :)

With this success we decided to give opportunity to enjoy Yumm to all Android users and now you can download it from Android Market for free. The port is identical to iPhone version which means that it still supports 11 locales; the same sound effects; the same amazing animation of Yumm.

Download it, enjoy it, tweet about it and let us know what you think about it and what you would like to see in the future versions. But keep your phones firmly and don't drop it ;)

If you are interested in writing about Yumm on your web site, you can use our press kit.
2 comments: We are pleased to announce that our second iPhone game Yumm is already available for free on iPhone and iPod touch. Yumm is a unique time killing game in which players can really put their reacting skills to the test with this charming creature of the name Yumm.

When the game begins the player places their finger over Yumm's open mouth and waits until the mouth starts shutting at which point the player should react quickly by taking the finger off the mouth, otherwise it will be "bitten off".


It is not easy to beat this creature but it will become easier with practice and over time, though the challenge will always be felt. The stunning graphics also immediately catch the attention of other people.

Yumm is now available world-wide for free of charge from the Apple's App Store for iPhone and iPod Touch, from iTunes or by visiting our web site.

You can also download our Press Release and Press Kit.
4 comments:

Few days ago we decided to make Hudriks free for 10 days and, to be honest, we did not expect such success and sincerely happy that people enjoy our game. We just can't stop watching how it is continuously climbing up in the ratings all over the world. In just two days Hudriks has already appeared in TOP100 Games in about 60 countries and got into the first lines in categories Adventure Games and Kids Games in several countries.

If you haven't downloaded it yet, get it from the AppStore right now. Enjoy it and please rate it and leave us your comments. Remember, Hudriks is free only until 15 April!
6 comments: